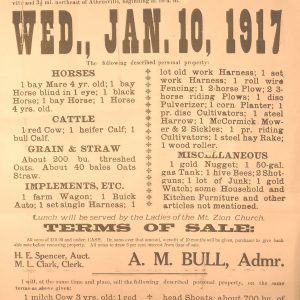 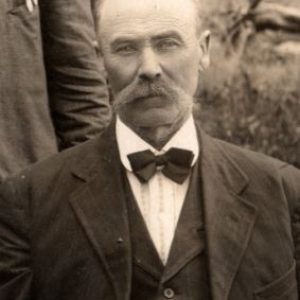 Here is a copy of the estate sale poster from the probate file of Alexander E. Claussen of Greene County, Illinois (click on image to see entire poster). I have a story about finding it. But first, let me explain that wills and probates are valuable to the genealogist not only because they name the deceased’s immediate family. You learn the financial circumstances of the deceased, including who they owed money and who owed them. If the death resulted in orphaned children, you might learn who became their guardian, or if they were sent to the poor farm, or bound out. I especially like them because they include detailed lists of possessions right down to the names of the horses and cows. That list gives a “photograph” of their daily life and who they were. If tools of a trade are listed, you learn his/her occupation. If books are included, the individual was literate. If those books include a Bible, that tells you something too. If there are crops in the field or large numbers of livestock, you learn what sort of farmers they were.

Years ago, I visited the courthouse in Carrollton to search for Alec’s probate, the first time I searched for one in person. I was in my early 20s, and as a rather tiny person people often mistook me for a teenager. I wanted to be taken seriously, so I dressed professionally, in a blazer, pencil skirt and low heels. The office was busy and it was self-service. I wrestled the huge, heavy index book to a table and found Alec there. I didn’t know then older probates are groups of papers folded and tied together with string then packed tightly into very long, narrow metal drawers called boxes, which are quite heavy. Excited that I’d found it, I asked the clerk where box 301 was. It was an old courthouse, with an extremely high ceiling. To my dismay, she pointed to the top row of a wall of boxes almost to the ceiling, and a very tall, narrow ladder. I likely turned red as I realized I would have to climb that ladder in a skirt and heels, but the really hard part was pulling out the long, heavy box while balancing precariously at the top of the ladder and carrying it down. I’m lucky I didn’t break my neck.

My efforts were rewarded. I was most pleased to find folded up with the papers, the original of the sale poster you see here and I learned lots of interesting information. Alec was well off, even owning an automobile. I am intrigued that there was a gold nugget listed and wonder if it was given to him by his brother Gideon who found gold in California in the 1850s or his son Charlie, who went to the Yukon to be a gold miner about 1895.